One of the most popular bonsai trees is the ficus microcarpa, also known as the Chinese Banyan. All over the world, this tree is used in landscaping, as well as a potted tree for indoors. If you are looking for the ideal bonsai tree for growing indoors, the Chinese Banyan is certainly a great choice. It can withstand a wide range of environments and still thrive.

Aside from the Chinese Banyan, there are several variations of the ficus microcarpa tree. Some of these varieties include the Green Mound, Green Emerald, the Malayan Banyan, and the Tigerbark Fig, as well as several more. Although all of these trees are basically ficus microcarpa trees, there are some differences in the leaves and bark of the tree.

The ficus microcarpa originates from Southeast Asia and is found growing in regions of India, as well as many other regions in Asia. When this tree is found growing naturally it can reach heights of 50 to 60 feet. The figs that grow on this tree are a natural food source for many of the animals in the area.

The figs of this tree grow to about one half of an inch; they will be a green color at first but will turn black. This fruit is not too good for human consumption, though its not poisonous, the taste probably won’t appeal to most people. Birds do like to feed on the fruit from the ficus microcarpa tree.

The Chinese Banyan will easily form aerial roots under the right conditions; these roots are formed by old bark if the canopy has a lot of foliage and there is enough humidity in the air. If aerial roots do form, you can either trim them back or keep them the way they are, depending on your taste and the style of tree you want. 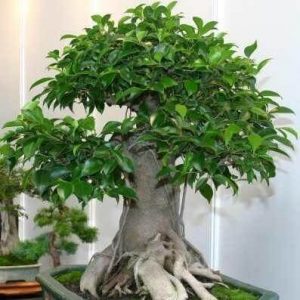 At one time the ficus microcarpa might have been difficult to find, but these days more and more greenhouse nurseries are keeping them in stock. You can buy a starter tree and grow it in the fashion of the bonsai, or you can purchase those bonsai trees that are being imported from Asia.

To grow the ficus microcarpa as a bonsai tree you will need a room that has plenty of sunshine. If you don’t have an area in your home that gets a lot of light during the day you can substitute a fluorescent light, but as always natural light is the best. With this tree you do not want to over water, as the roots will rot. Instead of watering on a regular basis try watering the plant and keeping close watch on the topsoil; do not water again until the topsoil has dried out some.

As for soil, you will want to stick with a well-drained bonsai soil. It is important that you not use any type of soil that will hold the moisture. While the tree is in active growth you can use common houseplant fertilizer to feed it, but you will only use it at half the recommended strength. Once the tree goes into hibernation, you no longer have to fertilize it.

You may also want to put your ficus microcarpa outdoors during the warmer months to ensure it is getting enough light, though you will want to bring the tree inside once the temperature drops to 55F and below.

Like any other ficus, Ficus Microcarpa Ginseng should be shaded by direct sunlight, which is harmful to the plant.

If the summer was hot, Ficus Ginseng will need some airing.

For spraying, it is best to use boiled water, so that the leaves do not have white spots. During a warm shower, you need to cover the trunk of the tree from getting water on it. Also, to increase the humidity near the plant, you can use a tray with wet pebbles. 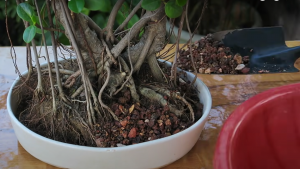 Also frequent pruning is necessary to make the bonsai turn out like a picture. Every 6 – 8 leaves should be cut to 2 pieces.

There are several ways to reproduce Ficus Microcarpa Ginseng:

It should be noted that all transplanted houses Ficus Ginseng will have the usual shape and underground root system.

Ficus microcarpa Ginseng is an extremely hardy plant and is protected from a variety of problems thanks to proper care. Diseases of the tree can only occur due to improper care:

First of all, you need to extract the roots and study them. Rotten and withered roots should be removed immediately. If there are pests, you should also get rid of them (see below). If on a thin part of the root system appeared bloating, it may indicate a root nematode, which prevents normal development of the plant. In this case, you need to get rid of the ficus and contaminated soil.

In the case of pests: a spider mite, a powdery worm and a shield, the tree requires insecticide treatment. When all problems are eliminated, Ficus Ginseng will quickly recover and will continue to delight its owners.