Today, many hosts can boast that their house is full of all kinds of ornamental plants – flowering and deciduous, seasonal and evergreen, small and large. Among this variety of home flora florists especially highlight ficus, which has proven to be not capricious and that any interior can complement a note of liveliness and freshness.

The homeland of the ficus is the countries of the Pacific and Indian oceans, the Mediterranean and South Africa. In these tropical zones grows most of the ficus species, both in the form of wood, shrubs, and vines. Of course, there are specimens, which taste moderate climatic conditions, for example, figs or Fícus cárica, found in Caucasus, Southern Crimea’s coast and Carpathians. And yet, in spite of such colorful natural habitat, the ficuses adapt very well to the decorative existence. These are some of the few plants that can be in a darkened place and do not require frequent watering. Also ficuses meet the aesthetic tastes of their owners, as depending on the species have a different color and shape of leaves, the height of the plant itself and can grow as bonsai.

The main species of ficus

Household ficus has several species, the most common in domestic floriculture. For example, the well-known Ficus elastica, which has several variations in its arsenal, differing in color and shape of leaves – they can be monochrome, leathery, the tip resembles a drop in shape, and can be with yellow stripes and bright spots. This species grows quite rapidly: from spring until autumn, if properly cared for, it gives one leaf per week. The caoutchoucous ficus is presented on the photo: 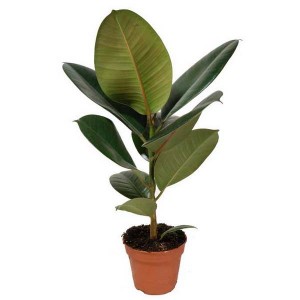 The next, no less popular home flower is Ficus benjamina. He is a “blood” relative of the caoutchouc nous, in spite of the fact that it is small-leaved and has a motley color. Its branches are elastic – as the plant grows, they bend in different directions, which makes this species especially elegant. Benjamin’s ficus usually places several individuals in one pot so that the trunks can weave or join together in a decorative trunk. It can also be grown in the form of bonsai, which is very exotic. In the photo you can see examples of Benjamin’s usual planting and as a bonsai:

The next representative of this amazing plant is Ficus binnendijkii. This species is distinguished by its elongated leathery leaves which are slightly bent at the top. The bark color varies from light gray to brown with white stripes. Binnandijka is a very hardy ficus, it feels good both on the north window sill and in the middle of the room. You can see a representative of this species on the photo: 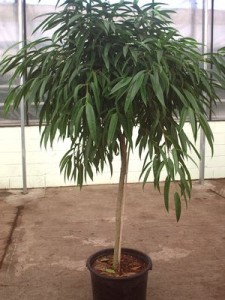 No less attractive not only the appearance, but also a way of their natural habitat is Ficus benghalensis. The fact is that in the tropics, he survives at the expense of a stronger tree – he begins life on one of the branches, launching down the air roots, which once reached the ground, form their own trunk. Thus, the ficus continues to grow and simply “chokes” the plant on which it lives. The home ficus behaves in a slightly different way, but even here, if properly cared for, it can show its “ability” and simply grow to the ceiling. The external signs of this species are a little similar to the rubber, but differ in roughness of the leaves. You can see it in the photo: 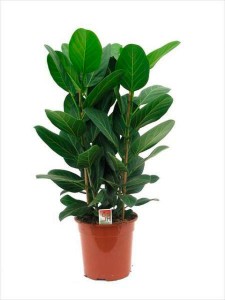 In the family of ficuses there are not only stately beauties, but also there are miniature flowers. For example, Ficus tiny or dwarf (Ficus pumila) – a cute plant that can decorate your home flower bed.

Usually it is grown as an ampel plant: in a hanging pot or wrapped around a pole. If you are engaged in greenhouse business, this ficus for care will thank you for the abundant spherical flowering, which is also inherent to its other congeners. The photo shows the “crumb” in all its glory: 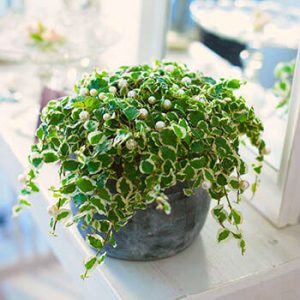 In addition to growth ficus still differ in intricate forms of leaves. Thus, for example, Ficus triangularis with its appearance can mislead anyone who does not go into all the subtleties of botany. But, in spite of everything, this amazing ficus is easy enough to care for, although it does not like drafts and abrupt changes of scenery. And if you also trim your shoots a little, it will delight you with its graceful crown and flowering, similar to berries.

The triangle ficus is shown on the photo: 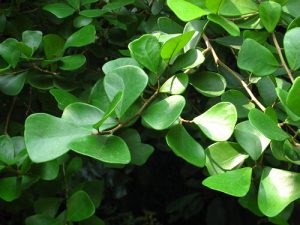 In terms of amazement with his external data, not far from his congener Ficus lyrata. It is an amazing plant with leaves that resemble a violin in shape and reach 50-60 cm in length. However, this ficus is very capricious in its care: if all its “requirements” are not met, it may react with a complete drop of leaves. Its maintenance requires high humidity, which means that the ficus will have to be watered frequently, and this can be troublesome for many fans of home flowers. 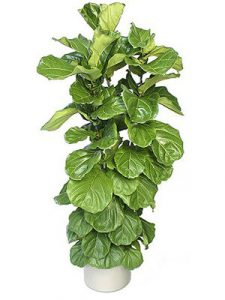 But Ficus Dull (Ficus retusa) does not stand out with something special in appearance and, nevertheless, it is very beautiful as a home flower. Behind such simplicity hides elegant bright green, glossy leaves, which, in fact, attract others. In natural conditions, the ficus grows like a banyan, releasing air roots, braiding them with a powerful trunk. By nature, the dull ficus is undemanding – it is very convenient, especially for busy people who are not indifferent to domestic plants. The native land of this plant is Asia and Malaysia.

In the photo you can see a simple but elegant flower: 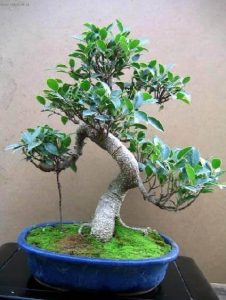 We have already mentioned many times that ficuses carry shady parts of the house quite well, but it is better to treat it without fanaticism and not to close the plant from the light in general. In summer you can treat your “green pet” with fresh air by putting it in the garden or on the balcony, but remember that ficuses can’t stand draughts, so check in advance if this is a good idea in your case. They also don’t like a sudden change of scenery – to avoid putting the plant under stress, it’s best to find a suitable place in your home in advance. Also, taking care of the ficus at home involves plenty of watering, spraying and rubbing leaves. An important condition for this is clean, constant water at room temperature.

What can be used to feed the ficus

As for feeding this plant, you should take into account its “biological clock”, namely, that in the spring-summer-autumn period it is actively growing. At this time, the ficus grown at home requires not only increased attention to the external conditions of its existence, but also the stimulation of natural processes, i.e. fertilization. Here you may use complex fertilizers or prepare a solution yourself as described: mix 0.5 g of superphosphate, 0.1 g of potassium salt, 4 g of ammonium nitrate, and pour one liter of water.

Tips on how to transplant the ficus

If you decide to transplant ficus, you will need specially collected soil from parts of sand, peat and leaf soil. First of all, you should put a drainage layer on the bottom of the pot, then fill the ground for the ficus, and then plant the plant. If it is young, it is better that the soil is more loosened, and if it is mature, then dense.

If you don’t want the leaves to fall off the ficus, it’s better to avoid stagnation of water. To do this, remember, the soil must be drained and periodically loosened.

It is better to do a new ficus transplant once every one or two years, and the old one is better to worry less often. And if you are interested in how to grow a ficus from an adult, then we should reveal a very delicate topic – reproduction. The fact is that this period comes only in summer, when the plant is fed, strengthened and ready to spread to several pots. Reproduction occurs by separating the upper or side leaves with cuttings, placed for a while in a glass of water. Once the leaf has the roots it can be transplanted into the ground. This is how you get a new ficus in your collection.

What diseases do the ficus have?

We have already talked a lot about how to take care of the ficus to grow big and strong, but still there are diseases that affect either parts or the whole plant. If your pet is sick, there are several explanations: firstly, it can be an organic disease, secondly – pests, and thirdly – a decrease in the level of care. If it is not the first and second, then you should be more attentive to the plant, otherwise it may start dropping its leaves or even die.

As for diseases, they may be of different nature and manifest themselves in different ways. So anthracnose is a fungal disease that began with the appearance of fungi Gloeosporium and Colletotrichum. As a result, brownish spots appear on the ficus leaves, which then grow into real ulcers, after which the whole plant can die. To prevent terrible consequences, you should cut all affected leaves, treat the remaining parts of the plant with fungicide, limit irrigation and regularly ventilate the room.

If on the back side of the leaf you suddenly found black spots, the diagnosis for your ficus is disappointing – church frost. This is also a fungal disease caused by cercospora spp. In order that it does not lead to the death of the plant, you must repeat what is applicable in anthracosis.

The most common disease is dropsy. It is tracked as a small outgrowth on the back of the leaf due to excessive watering. Leaves affected by dropsy are not restored, so they are better cut. And if they began to fall off on their own, then you should pay attention to the quality of care. This is how the plant reacts to sudden changes in temperature and humidity. Whatever happens, you need to change your attitude to the ficus and create the most favorable conditions for it.

If we are talking about pests, the most dangerous for the ficus is the spider mite. It is a red-colored insect, which weaves a spider web on the plant itself and sucks the juices out of it, so it becomes sluggish, light spots appear on the leaves, and sometimes the leaves fall off. You can get rid of these parasites by special chemical means, by washing the ficus with warm water or by infusion of onions and garlic, which need to wipe the leaves.

Ficus is a truly amazing plant – it is full of life and energy. Love your pets 😉.